In Her Shoes Home

In His Shoes: Andre McDonnell 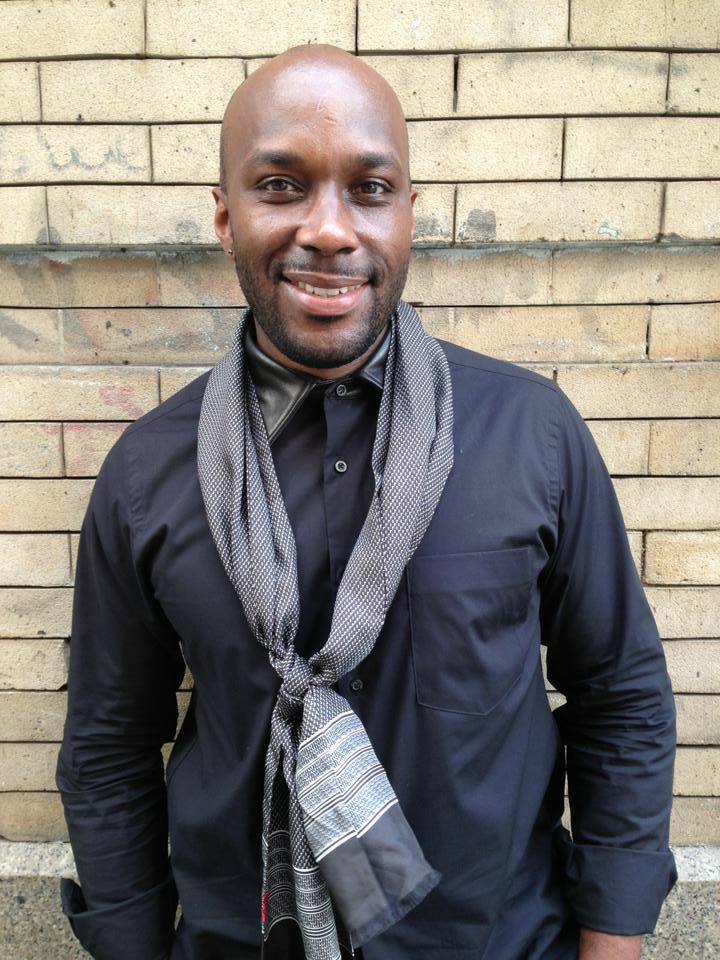 In November 2015, there were 59,929 homeless people, including 14,476 homeless families with 23,912 homeless children, sleeping each night in the New York City municipal shelter system. Many of those individuals are roaming the cold streets with worn down footwear or in some cases, no shoes at all. The thought of so many people going without proper coverage for their feet in the sneaker capital of the world is hard to imagine. Enter Brooklyn native by way of Barbados, Andre McDonnell.

For the past three years, Andre has been walking the streets of New York City as the founder of It’s From the Sole giving shoes to the homeless. The fashion industry veteran-turned-non-profit-founder is passionate about making a difference in the lives of those in need. He’s just 120 sneakers shy of gifting 10,000 sneakers in New York City alone. Can you imagine that? Ten thousand pairs of shoes! Today on In His Shoes, Andre gives us the inside scoop on why he’s committed to helping everyone experience the comfortable journey they deserve:

In Her Shoes: You’ve been working in the fashion industry for over a decade, styling celebrities and working with one of SoHo’s hottest retailers. What made you transition from such a cushy, high-profile career to launch It’s From the Sole?

Andre: Back in June of 2012, I was playing basketball with friends in the city. When we finished our game and started heading to the train, I saw a homeless man with no shoes. It really bothered me so I offered him my shoes off my feet. He couldn’t believe it. The look of gratitude on his face was priceless. It was then that I knew that I needed to keep giving. It started off as a hobby where I gave my own sneakers away, but when I ran out of shoes to donate, I started asking my friends to join in and they didn’t hesitate.

To show my friends that we were seriously helping those in need, I would send them pics of the homeless person with their shoes. That small gesture really made a difference and gave them an opportunity to connect with someone they’ve never met before, but needed their assistance.

I make it a point to never give a shoe to anyone that I wouldn’t wear myself so sometimes, when I receive donations I hand clean the shoes to make sure they are in the best shape possible. After going out a few times to donate, I realized that this was bigger than me and that I needed to create a formal name for it.

In Her Shoes: How did you arrive at the name It’s From the Sole?

Andre: I realized that it really felt good to do this. It touched my soul and the souls of many others. It’s From the Sole means that you’re giving from the soul of your heart to the soles of your feet. All I’m doing is taking things you don’t want and giving it to someone who actually needs it. We live in the #1 sneaker culture on the planet. When we think of this, there’s no reason why a movement like this shouldn’t be successful here. I’m not telling you not to get your Yeezy’s or your Jordans. I’m just saying that if you have old sneakers you don’t wear, there are thousands of homeless people in this city. Why not give them away to someone in desperate need?

In Her Shoes: What are some of the brands that you’ve partnered with over the years?

Andre: Adidas was my first brand collaboration. They found out what I was doing and offered up samples from their showroom…tons of them! K Swiss has been sending me sneakers and there are quite a few celebrities and athletes who have contributed to the movement. 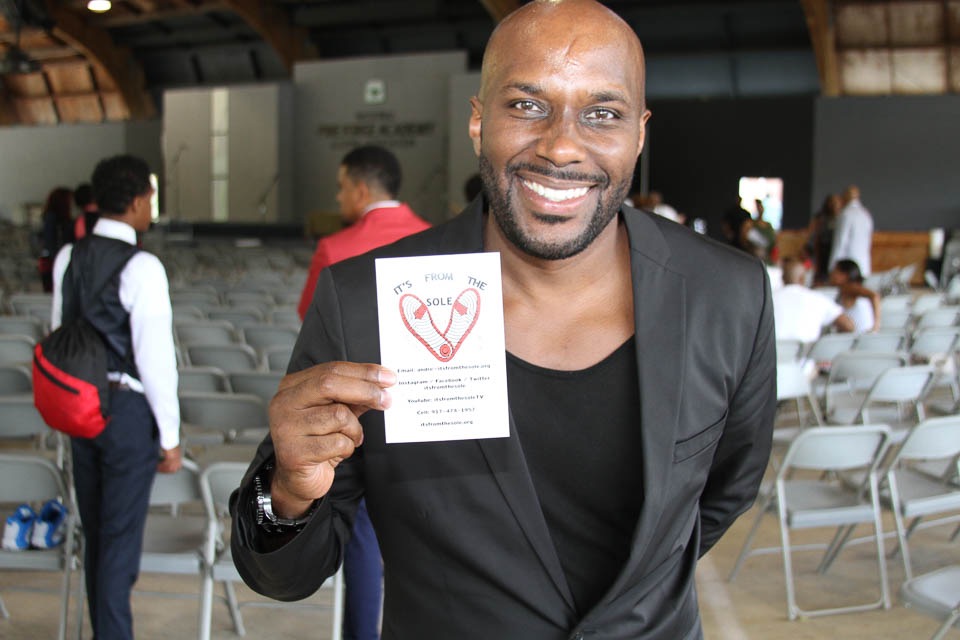 In Her Shoes: Who are some of the celebs that have donated? 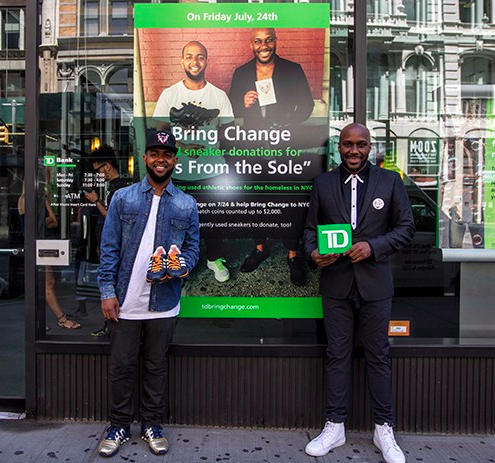 In Her Shoes: That’s so awesome. You’ve also garnered some pretty impressive publicity over the years. Can you tell us a little bit about that?

Andre: Sure. I’ve been featured on The Meredith Veiria Show, Arise 360, NBC, ABC, CNN, Hot 97, and I was honored as “New Yorker of the Week” by NY1. TD Bank also recently partnered with It’s From the Sole to support the movement as part of their “TD Bring Change” initiative. 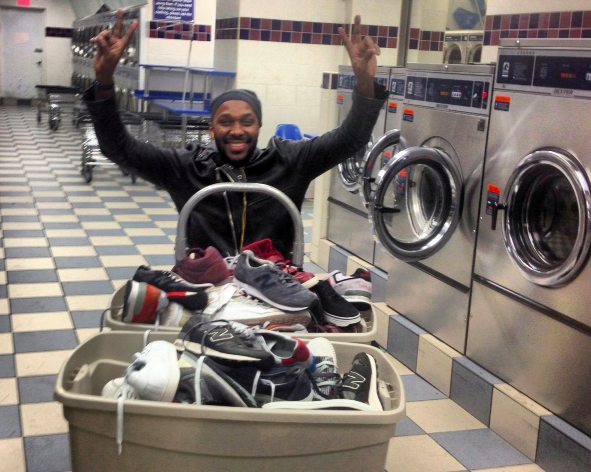 In Her Shoes: What is a day like in Andre McDonnell’s shoes?

Andre: I get up, put on some motivational music and start organizing sneakers by sizes ranging from babies to size 14. Once that’s done, I start working on social media. I manage all of my own accounts including Twitter, Instagram, Instagram and Facebook. It’s important to me that I thank people individually. I truly believe in nurturing relationships both on and offline. Next, I make and return calls from the previous day and begin to answer emails. Lastly, I get on the train – which I affectionately refer to as the “sole” train. This is where I become my own PR, advertising and marketing company by getting on the train, building with the people, and letting them know what It’s From the Sole is all about.

In Her Shoes: How have you handled the naysayers?

Andre: Believe it or not, I’ve had people say that I talk about It’s For the Sole too much. Now if I were to put a naked woman or two people fighting on my page I’d get a lot of likes. It’s so funny what we find “important” sometimes. Until your hands have done something 8,880 times, don’t step to me. If you don’t know what it’s like to do something that’s totally selfless, then you definitely can’t walk in my shoes.

In Her Shoes: What do you have planned for It’s From the Sole in 2016:

Andre: It’s really simple. It’s time for us to stop telling people what we do. It’s time to get the entire community involved, so I’m asking people to do it with me. I want to get more children involved. We see so many stories in the media about kids not respecting our homeless population. I want them to realize that homeless people are humans, too. It’s a movement!

In Her Shoes: What’s the most memorable exchange you’ve had with a homeless person on this journey so far?

Andre: There was a woman on 39th and 8th Avenue in Manhattan resting on the ground in some sandals and socks during the middle of winter. I gave her a brand new pair of sneakers and she started crying hysterically. Her reaction was so intense and emotional. You really couldn’t make something like this up. The way she started tearing up is a moment I will never forget. She couldn’t believe that I was just “giving” her a pair of brand new sneakers and socks. I had to lift her up to help her put the shoes on. Her feet were much smaller at one point, but I gave her a men’s size 10 (which fit perfectly) because of the how swollen her feet were from walking the streets without footwear.

In Her Shoes: How has your passion for what you do impacted your personal relationships:

Andre: Everyone assumes I don’t have time for socializing. They assume I’m always busy working so they don’t call me to hang out and just have fun. I’m single. I want to have balance in my life. I want to make time for my passions. So to any of my friends friends reading this, stop assuming I’m always working. Hit a brotha up!

In Her Shoes: Any final thoughts?

Andre: We all have “It’s From the Sole” in us. We just have to find a way to bring it out.

For those of you wishing to channel Andre’s spirit of goodwill, visit his website at itsfromthesole.org or follow him on IG @itsfromthesole for more information!

As a New York City storyteller, filmmaker, digital content creator, and PR strategist, Renae Bluitt created "In Her Shoes" to empower and enlighten women committed to realizing their dreams.

← Previous Story Get Glam for 2016: Luminous Skin Is In
Next Story → Ladies of Business Conference Presents Pitch Please!

Search In Her Shoes

Know of a Fly Female Entrepreneur you'd like to see featured on In Her Shoes or simply want to drop us a note? We'd love to hear from you!